This man cut his car in HALF in his divorce!

Getting a divorce is no picnic, but having to separate all of the devices, furniture and vehicles you and your spouse shared can add a dimension of stress to the ordeal. Well, the good news is, if you’ve got a dark sense of humor and a saw; you can just cut it all in half…that, at least, is what German YouTuber “Der Juli” (Martin.G) decided to do as a final act of revenge against his cheating ex. 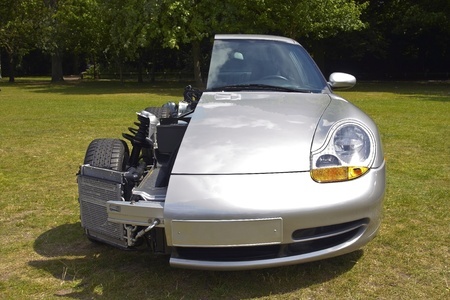 The video plays on to showcase Martin using power tools to saw their possessions in half. 16 of them.http://metro.co.uk/2015/06/18/jilted-lover-cuts-all-his-ex-girlfriends-things-in-half-and-sells-them-on-ebay-5251456/

These items – including half a mobile phone, furniture, television set and car (yes, half a car) – were shown to be uploaded onto eBay…bids anyone?

It turns out, that wasn’t the half of it

The newly divorced man who appeared to turn bitter in an act of revenge against his cheating wife is actually a brilliant PR stunt by German lawyers; ‘Deutsche Anwaltauskunft’ who declared the man and video fake.

The idea behind it was to humorously point to a problem worldwide: that too few married couples take precautions for the case of a possible separation which can end in bitter fights. I don’t think I’d want to split my new iPhone in half.

This guide will help you make better, more informed decisions in your divorce and give you more clarity as to what you need to do next. So what are you waiting for?

By Submitting this form you are agreeing to let us keep in touch with you via email. For more information see our Privacy Policy